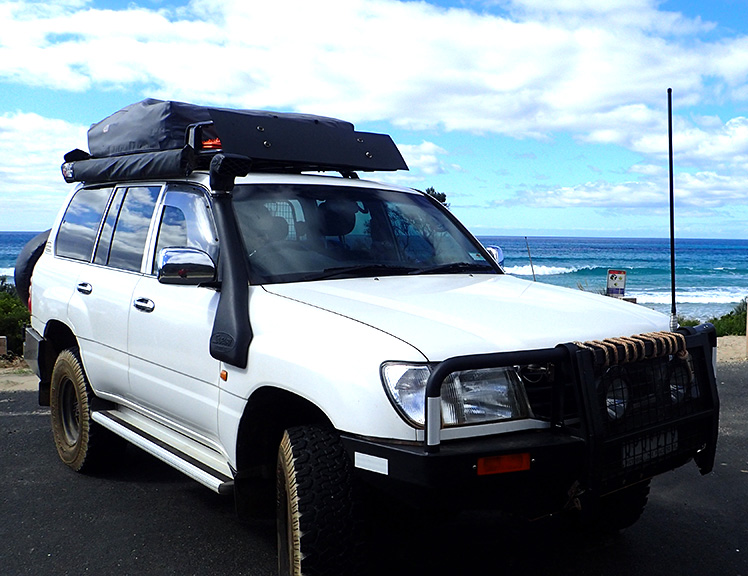 This is “Ohno” our 1998 Toyota Landcruiser and will be our transport, kitchen, accommodation and home for the coming months.

We purchased ‘Ohno’ in November of 2015 from a German couple, Jens and Katharina who had toured around Australia for 12 months in the truck. Check out their blog (It’s in German) https://oneyeararoundaustralia.wordpress.com/ We originally wanted to purchase an unmolested Toyota LandCruiser, Hilux or Nissan Patrol and modify to our own specification, we spent hours trawling through the classified’s and did a deep amount of research working out which vehicle to buy and the process behind preparing it for an overland trip. For more information on the decision of choosing The Landcruiser 105 head to our FAQ page. Then we came across this Landcruiser and it jumped out at us. The truck was already very well kitted out and was packed with equipment, it even came with a rooftop tent!

Mechanically the Landcruiser needed a bit of work at the start, we changed all the belts (the timing belt was fraying), the oil and filters, control arms, bearings in all the front wheels and then there were the DIY electrics fitted by a previous owner. We ripped out the dodgy Chinese immobiliser system that would cut in anywhere between 60 sec to 120 seconds into your drive and would kill the engine which then would require locking the car from the inside, unlocking, then opening and closing the doors, then locking & unlocking the doors then starting the truck again, in this order exactly otherwise 60 seconds later the engine would die again! We then pulled a birds nest of wires, meters of unused electrical wire and replaced existing wiring and fuses which revealed a breach in the firewall we fixed with a sealant.

Since November we have spent quite a bit of time preparing “Ohno” for her big adventure, we travelled from Melbourne, Victoria to South Australia and into The Grampians National Park and on a separate trip a 3-week coast drive up to Queensland, onto Fraser Island and then down through the Great Dividing Range. They were fantastic trips and gave us a greater idea of how to set up the truck for the next stage.

We have modified the internal electrics adding a front and rear camera, a 7″ LCD display, reverse mounted flood light, new stereo, and speakers, USB hardwired points for charging, replaced all internal bulbs with LEDs, adding a 32″ LED light bar to the front bar, a load a rocker switch, removed the firewood collector, added a customer sand track box and storage to the roof rack and the most rewarding modification adding lambs wool seat covers, the comfort level improves by 100% with these fitted.

Nothing will replace the Landcruiser, but this is

Social distancing and spotted this guy while walki

Heading back from the airport and spotted a 100 se

Spotted at the end of my street in West London, fu