Malaysia is located in the equatorial region, and has a tropical rainforest climate. Located near the equator, Malaysia’s climate is categorised as equatorial, being hot and humid throughout the year. The average rainfall is 250 centimetres (98 in) a year and the average temperature is 27 °C (80.6 °F).

Malaysia has a good road system, one of the best in Southeast Asia. Emergency phones are located along the roads every two kilometers. Along with state or federal roads, there are toll roads. Drivers can pay by cash cards or ‘touch-n-go’ cards; both can be bought at toll kiosks on highways. In large cities, there are many cars and motorcycles on the road since driving in Malaysia is popular.

Malaysian car drivers are generally courteous. However, motorcyclists are not so well behaved; they can run through red signals, ride along the wrong side of the road, the wrong way of one-way streets or motorway shoulder, or along footpaths.

A detailed route showing where we went overlanding and exploring. We jotted down the routes we travelled on a physical map which travelled with us from Australia to the UK, then transferred this to a digital form using Google Maps (KML and GeoRSS Layers)

These are exact appropriations, maps differ between brands and converting from paper to digital may lose some details in translation. This should still show in great detail our route.

The KML file is not showing the map with a correct zoom. Here is a screen grab. 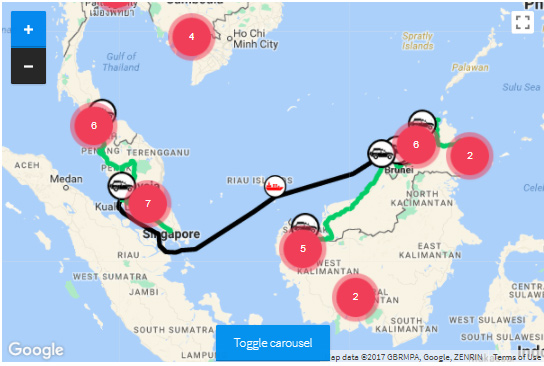 Night boat cruise on the Thames.

Beer Lao in West London, doesn't taste the same, b

@espresso_seventy9 we’re not stalking you! Twice

Search and Rescue LR L316. This would make a great